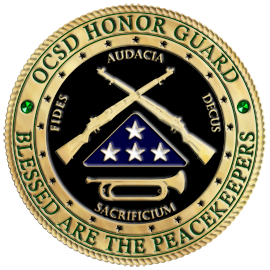 The Honor Guard pays tribute to and represents the finest traditions of the law enforcement profession, the courage of all who serve within it and the sacrifice of those who paid the ultimate price in the performance of their duty.

Annually, the Honor Guard performs at approximately 60 departmental, public, and on occasion, national ceremonies. Honor Guard responsibilities have grown to include basic academy graduations, retirement dinners, dedications, memorials, funerals, court and political functions. Over the past fifteen years, the Honor Guard has expanded to fulfill the growing amount of commitments requested by the Sheriff’s Department, as well as public and private organizations of Orange County.

The Honor Guard has been invited to perform for over 14 years at the State Peace Officers Memorial in Sacramento, California. These ceremonies are witnessed by the Governor, hundreds of high-ranking officials, peace officers, families of fallen officers, and thousands of citizens. Following the death of Deputy Brad Riches, the Honor Guard was tentatively scheduled to perform at the National Peace Officer’s Memorial in Washington, D.C.