Over the weekend of September 10th and 11th, the Orange County Law Enforcement Explorer Advisor Association (OCLEEAA) hosted its second annual Explorer Competition at the Sheriff's Katella Training Facility. Forty-one 4-person teams, from agencies throughout Orange and Los Angeles counties, participated in this event. Orange County Sheriff's Department Explorer Post 449 fielded eight teams, who took a very impressive 1st place, 2nd place, two 3rd place, three 4th place and one 5th place trophies in team events. Although all of the participants deserve recognition for their efforts, as they represented our agency proudly, special congratulations go out to the following explorers for a job well done.

Explorer Post # 449 would like to thank Sergeant Paul Fuzzard from OCTA for arranging an OCTA bus to be used for the Tubular Assault Scenario on both days of the competition. 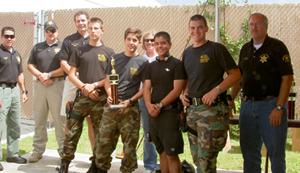 We especially thank Captain Dan Martini, Sergeant Tom Giffin, Deputies Dave Hartman and Joe Warner from the Training Division. This competition would not have been possible without the use of the Katella Training Facility and certainly would not have been the success that it was without the patience, expertise and leadership of these individuals from the Training Division's team. They not only opened their facility to OCLEEAA, they generously assisted in the coordination of the scenarios and the overall operation. The Explorer Post and its staff sincerely appreciate all that you did to assist us in this endeavor.

Explorer Post 449 would like to thank the following Sheriff's personnel for their assistance with staffing, funding, training and equipment needed for the competition: