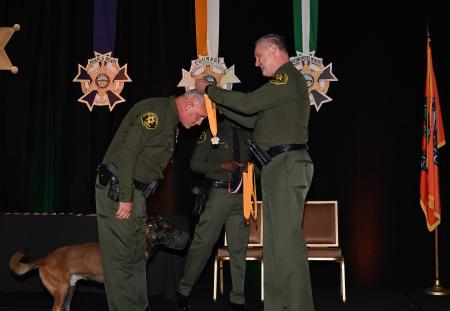 Thirty-one medals for Lifesaving were awarded, along with 14 medals of Merit and nine medals of Courage.   K-9 Rosco also received the Canine Medal of Merit for his work apprehending a knife-wielding suspect. Three deputies received multiple medals related to one incident.

In addition, Sheriff-Coroner Don Barnes recognized San Juan Capistrano resident Roy Heine with the Sheriff’s Medal of Courage for his bravery in fighting off a suspect who was attacking an elderly woman.

Award recipients and their families attended a limited-capacity event at the Anaheim Hilton to celebrate their achievements.  A recording of the ceremony can be viewed at ocsheriff.gov/MOV.

Interviews with select recipients can be scheduled, upon request. A brief synopsis of this year’s incidents is attached. Clean B-roll of the event also can be provided to members of the media.