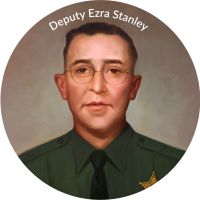 On the night of November 19, 1940, Deputies Ezra Stanley and Carl Pryor were patrolling along Pacific Coast Highway between Sunset Beach and Huntington Beach when their car was struck from behind by a car driven by Ray Dolan, a Huntington Beach café operator.

The car was knocked into a post that was part of a wire fence along the highway. The front bumper was torn off by the post and the car skidded on as the gas tank caught fire. The car finally came to rest 152 feet from the point of impact.

Dolan, who had been drinking with friends, claimed the accident was a head-on collision and he did not know how it happened. He was arrested by Huntington Beach Police for negligent homicide, drunk driving and drunk. The Coroner's jury determined the cause of death to be "being burned to a char while in the discharge of his duties as a Deputy Sheriff" and found the cause to be "negligence on the part of Dolan in operating his automobile."