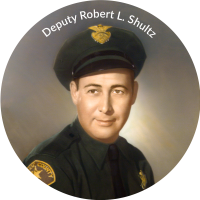 On April 21, 1958, Deputy Sheriff Robert Shultz, 35, was shot and killed while on duty in the Dana Point area. Patrol Deputies Ed Johnson and Robert Shultz stopped an old converted school bus from Arizona on information it contained a mentally disturbed father threatening his wife, daughter and two sons.

After a period of firing by both sides, the Deputy collapsed from his two initial wounds but not before radioing for assistance. On the arrival of assisting officers, the father was found dead, wounded three times by the officer's bullets and once, through the head, by his own. The older son was found with five wounds from the Deputy's weapon and died at the hospital. The younger son was found dead with one round through the top of his head from the father's weapon.

The second Orange County Deputy Sheriff had given his life as a result of gunfire. His partner still carries two .22 caliber slugs located in inaccessible parts of his back and hip.