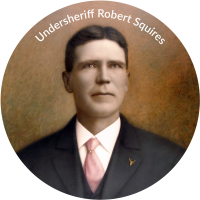 On the evening of December 16, 1912 Sheriff Ruddock received a telephone call from the Irvine station, telling him that a young Irvine girl had been attacked by a drifter who had fled into the hills. Sheriff Ruddock immediately rounded up assistance and took off after the assailant. According to an account in The San Joaquin Gazette, a tall, slim young man about 27 years old had stopped at the ranch of Bill Cook asking for work. None being available, he was sent away, but not before he saw Cook's 16 year old niece, Myrtle. Late that night he returned to the ranch. The dog was barking so Cook sent his niece and her younger sister out to tie up the dog.

While outside, a man with a gun jumped out at them and tied up the younger girl. After firing once into the ground, he took Myrtle behind the barn. The younger girl untied herself and ran screaming into the house. Her uncle, who had no weapons, immediately went for help as two more shots were fired from behind the barn.

Gathering men from nearby farms, Cook returned only to find the assailant gone. The sheriff, Undersheriff Robert Squires, Deputy Tex Stacey, Constable Calvin E. Jack Jackson, and Marshal Sam Jernigan along with a score of local farmers, searched all night with lanterns. Word was received by early morning that the suspect was seen heading for an area called Tomato Springs.

When the posse caught up with him, the fugitive taunted the men to get him and ran off into the foothills. When Squires caught up to him, both fired at close range. Squires was killed. Tex Stacy caught up with the man next, noticing he was wounded. Soon Stacey was wounded himself, and although he shifted his gun to his other hand, the gun was shot away and both hands were useless.

Meanwhile, others circled the assailant's position. By mid-morning there were more than 200 people involved in the shootout, including Company L of the National Guard. Several guardsmen were selected to charge the gunman, including Captain Nate Ulm, a former deputy sheriff. They slowly got into position, then attacked. Shots were fired and the gunman was dead, a hole though his temple. The "Tomato Springs Bandit," as he was later called, was taken to Santa Ana. Eyewitness accounts noted that the body was propped up in the front of seat of a car and paraded up and down Fourth Street before being taken to the undertakers.

Although many took credit as being the person who fired the fatal shot, there was some evidence to indicate that the final wound was self-inflected.

The identity of the criminal was not known for several years. He was thought to be Ira Jones of Oregon and it is this name that appeared on the tombstone. But later records showed that the body was positively identified as Joe Matlock by his father, a former mayor of Eugene, Oregon, who did not want to acknowledge the relationship.

Two other facts also emerged: the Irvine girl had been unhurt; and Joe Matlock the "Tomato Springs Bandit," was slowly dying of tuberculosis when he incited the manhunt.

The incident became known as the bloodiest battle in Orange county history leaving Squires and Matlock dead and three others wounded. Squires became the first Orange County peace officer to be killed in the line of duty. Years later, when the mortuary where the bodies were taken was torn down, the safe revealed two guns. One had belonged to Squires and the other to Matlock.