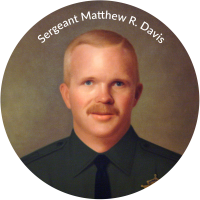 Matthew R. Davis was born in Porterville, California on August 1, 1964. He grew up in Corona, California and graduated from Corona High School in 1982. He attended Riverside Community College and graduated with an Associate of Arts Degree in Criminal Justice in 1984.

Matt joined the Orange County Sheriff's Department in 1986 as a Deputy Sheriff Trainee. He graduated from the Sheriff's Basic Academy and was assigned to the Theo Lacy Branch Jail. Two years later he was promoted to the rank of Deputy II and in 1990 Matt transferred to the South Operations Division.

While working patrol, Matt became a member of the Major Accident Reconstruction Team (M.A.R.T.). After a few years of working patrol, Matt was assigned to Commercial Vehicle Enforcement in the City of Laguna Niguel. In 1994, Matt successfully passed Motorcycle Enforcement Training and was selected as a Motor Officer in the City of Mission Viejo, he was also a motor training officer.

Matt received numerous citizen commendations from the community and was honored by Mothers Against Drunk Drivers (MADD) for his continual efforts in the enforcement of drunk driver offenders.

In 1999, Matt was promoted to the rank of Sergeant and was assigned to the Theo Lacy Branch Jail. In 2000, Matt transferred to the South Operations Division as a Motor Sergeant.

On the afternoon of Friday, September 20, 2002, tragedy struck the family of the Orange County Sheriff's Department. While on duty, in the City of Mission Viejo Sergeant Matt Davis was involved in a traffic collision. Matt was traveling southbound on his motorcycle on Marguerite Parkway approaching the intersection of La Sierra Drive. Suddenly, a vehicle trying to make a left turn onto northbound Marguerite Parkway pulled out into Sergeant Davis' lane causing the two vehicles to collide.

Matt fought vigilantly for two days, and despite heroic medical efforts, succumbed to his injuries on September 22, 2002.

Matt will always be remembered not only as a friend, but also as a hero. He always maintained a friendly, professional, and business like demeanor as he dealt with his co-workers and members of the community he served.

Matt is survived by his wife and three children.