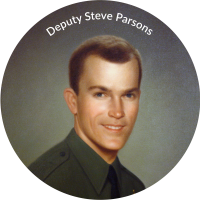 Deputy Steven Edward Parsons was much more than a man who was born and tragically died 36 years later. During his lifetime, Steven Parsons, son, husband, father, friend and fellow Deputy Sheriff, touched many lives. Steve was, and will continue to be, a role model for children, fathers, friends and other police officers, intent on being the best they could possibly be.

As is the custom, the background of a Sheriff's Deputy applicant involves intense scrutiny from the date of birth to the date of application. Literally, this includes a person's entire life. Prior to being sworn as a Deputy Sheriff, Steve worked as a busboy, payroll clerk, sales clerk, student police department intern, operations manager and procurement coordinator. Ironically, the comments provided by previous employers echoed those mentioned by his future supervisors within the Sheriff's Department who expressed such official comments as:

In 1997, Deputy Steve Parsons was selected as the first deputy to be assigned to motorcycle patrol in the city of Laguna Hills. In his nomination for the coveted Gold Star Award, merely two and one half weeks prior to his death, Steve Parsons was lauded as "having single-handedly impacted traffic safety resulting in significant decreases in traffic accidents". "During Steve's first year as a motorcycle enforcement officer, his hard work and relentless drive, resulted in a traffic citations increasing over 150% while traffic accidents were reduced by an astounding 40%".

Deputy Parson's friends, fellow deputies, as well as the public he served in the city of Laguna Hills every day will sorely miss him. His fellow deputies described him as totally wrapped up in his family. His constant comments to fellow deputies about his wife and children always showed both admiration and meaningful pride. 'He was the 1st deputy selected for a motorcycle assignment in Laguna Hills. He was always a hard charger, had the needed tenacity and never rested." He was often asked to "SLOW DOWN" because others couldn't keep up with him.

One of his best friends, and fellow traffic officer, speaks of the time Steve stopped a young man on a small motorcycle because he had no helmet. After "meaningful dialogue" the rider was allowed to ride home on the condition he obtain an approved helmet. Some weeks later, another deputy saw the motorcyclist riding down the street. The rider proudly pointed to his helmet which was inscribed on the back with "PARSONS APPROVED" accompanied by a "happy face." This is but one example of the overall impact DEPUTY STEVE PARSONS HAD UPON THE CITIZENS OF SOUTH ORANGE COUNTY, PARTICULARLY THOSE HE FAITHFULLY SERVED IN THE CITY OF LAGUNA HILLS.

Steve is survived by his wife Kathy, his daughter Kelsey six years old, and his son Nathan who is three. He is also survived by his mother, father and sister. He will be greatly missed by his family and the men and women of the Orange County Sheriff's Department.